Caen, Feb. 21st, 2013 - In a new research published in the high ranked scientific journal Toxicology, Robin Mesnage, Benoît Bernay and Professor Gilles-Eric Séralini, from the University of Caen, France, have proven (from a study of nine Roundup-like herbicides) that the most toxic compound is not glyphosate, which is the substance the most assessed by regulatory authorities, but a compound that is not always listed on the label, called POE-15. Modern methods were applied at the cellular level (on three human cell lines), and mass spectrometry (studies on the nature of molecules). This allowed the researchers to identify and analyse the effects of these compounds.

Context: Glyphosate is supposed to be the "active ingredient" of Roundup, the most widely used herbicide in the world, and it is present in a large group of Roundup-like herbicides. It has been safety tested on mammals for the purposes of regulatory risk assessment. But the commercial formulations of these pesticides as they are sold and used contain added ingredients (adjuvants). These are often classified confidential and described as “inerts”. However, they help to stabilize the chemical compound glyphosate and help it to penetrate plants, in the manner of corrosive detergents. The formulated herbicides (including Roundup) can affect all living cells, especially human cells. This danger is overlooked because glyphosate and Roundup are treated as the same by industry and regulators on long-term studies. The supposed non-toxicity of glyphosate serves as a basis for the commercial release of Roundup. The health and environmental agencies and pesticide companies assess the long-term effects on mammals of glyphosate alone, and not the full formulation. The details of this regulatory assessment are jealously kept confidential by companies like Monsanto and health and environmental agencies.

Conclusion and consequences: This study demonstrates that all the glyphosate-based herbicides tested are more toxic than glyphosate alone, and explains why.

Posted by Spray Advisory at 3:10 PM 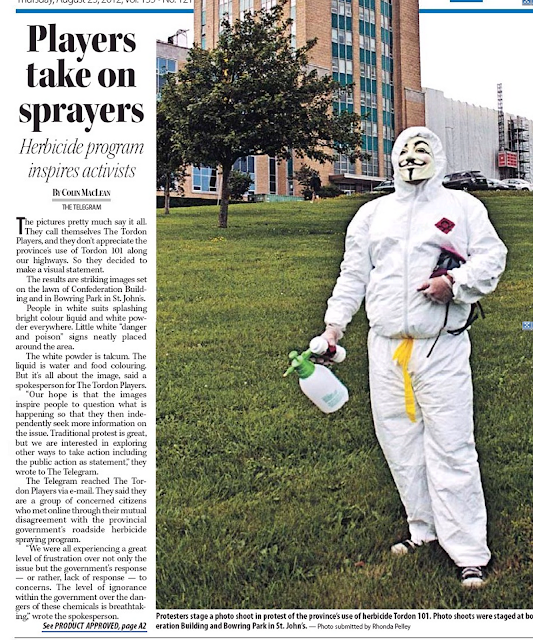 Posted by Spray Advisory at 4:12 PM

August 19, 2012 - 4:02am BY GREG LOCKE | NEWFOUNDLAND DIARY
Share on facebookShare on twitterShare on linkedinMore Sharing Services

http://thechronicleherald.ca/thenovascotian/127975-questionable-herbicide-decision-rekindles-political-hot-stove
ST. JOHN’S, N.L. — Politics in Newfoundland and Labrador has been so far off the radar this summer it is possible people have forgotten there is such a thing.
Even the seemingly endless political train wreck of Labrador MP Peter Penashue has been blown off with a collective shrug and a look that says, “Yeah, what else is new?”
Penashue, you may recall, is the intergovernmental affairs minister in Prime Minister Stephen Harper’s cabinet. Elections Canada has pointed out that Penashue spent too much in his 2011 campaign.
His campaign boss ended up apologizing for the spending errors.
But in the past two months, no one in the circles I have travelled has uttered a sentence about politics or politicians.
It was kind of sad, really, watching political junkies digging through the Dumpster scavenging news scraps about Muskrat Falls, looking for talking points to fill their tweets, blogs and incoherent rants on talk radio.
Until this week.
Now that the regatta and the folk festival are over in St. John’s and people are getting back from holidays, a few government actions have raised heads from their summer stupor.
Many people are now questioning of the ethics and intelligence of Premier Kathy Dunderdale’s government.
A government decision to spray a toxic herbicide it banned last year has set off a chemical reaction among environmentalists and others who have worked for years to end the spraying of pesticides and herbicides.
Even though it banned the use of Tordon 101, which contains the known toxin 2,4-D, the government said it will spray it along hundreds of kilometres of roadsides to kill brush. Opponents say it is poison and the government should use mechanical clearing.
Transportation and Works Minister Tom Hedderson said the spraying program is necessary to keep highways safe and the chemical is no more dangerous than salt.
In Bonavista, town councillor John Norman voiced his dissatisfaction with the provincial government’s maintenance of the town’s historic sites.
All are major tourism attractions that bring traffic to the remote community.
In response, Mayor Betty Fitzgerald wrote a letter to Tourism Minister Derrick Dalley saying Norman doesn’t speak for the town, and she hoped his comments would not jeopardize council’s standing with the government.
Fair enough, but Fitzgerald didn’t write the letter. She asked a political aide of Bonavista Tory MHA Glen Little to write the letter, and Fitzgerald signed it.
Last week, the government announced that MHAs are now forbidden to approach civil servants when dealing with constituent issues and must now go through a minister’s executive assistant or the minister.
Executive assistants are political appointees who are usually friends of the minister or the party.
NDP MHA Gerry Rogers said it is a violation of confidentiality and politicizes the work that they do when working on behalf of constituents. Rogers believes the move puts a chill on people seeking help from their elected representatives.
With the polls showing the provincial NDP making significant gains while the Tories are dropping like a lead jigger, it is hard to imagine this as anything but a move to limit the effectiveness of opposition members and their legitimate role in an honest democracy.
You have to wonder if anyone in the province understands the meaning of conflict of interest. Or maybe they just don’t care because this is how politics has always been done in Newfoundland and Labrador.
The decline of the Roman Catholic Church in the province coincided with rising literacy rates. That is because education and knowledge are power.
Now that citizens have become politically literate and aware, the power elite are losing their magical powers.
Greg Locke is The Chronicle Herald’s correspondent in Newfoundland and Labrador.

Posted by Spray Advisory at 5:18 AM

Spray woes: Province falling down on monitoring pesticides
The Telegram ('s) - Final - 10-01-2002 - 253 words
Judie Squires - environment to become poisoned? A temporary ban on all residential pesticides has to be put into place, to protect us, our wildlife and our environment as a whole. Judie Squires …

Government lax on cosmetic pesticide regulation: advocate
The Telegram () - 08-28-2004 - 613 words
Stokes Sullivan, Deana - Despite increased awareness about adverse health effects from pesticides, Judie Squires, a member of the Pesticide Working Group of and , isn't optimistic the province will ban cosmetic use…

Province lagging behind in pesticide control
The Telegram () - 09-04-2005 - 496 words
Squires, Judie - it to do is to prohibit the cosmetic use of synthetic pesticides altogether in order to protect our citizens and the environment. Judie Squires writes from Portugal Cove-St. Philip's…

The two sides to pesticide use
The Telegram () - 07-16-2006 - 781 words
Judie Squires - health of your families. When 's most respected health authorities tell us pesticides threaten our health, we should all be listening. Judie Squires writes from Portugal Cove-St. Philip's…

Inquiry implicates BTk
The Telegram () - 06-24-2006 - 353 words
DEANA STOKES SULLIVAN - of trees. The live spores can be inhaled by humans and animals exposed to BT. Judie Squires, secretary of the Northeast Avalon Group of the Sierra Club, says despite claims that…

Delayed pesticide laws 'disappointing'
The Telegram () - 06-24-2006 - 833 words
DEANA STOKES SULLIVAN - at the end of this year. These products will only be sold to certified dealers. Judie Squires, secretary of the newly formed Northeast Avalon Group of the Sierra Club, isn't…

Above Articles available through Trancontinental Newsnet

My Radio Interviews (Use RealPlayer for CBC)